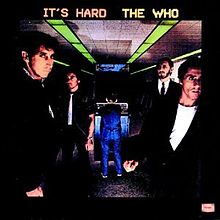 I must admit I stopped listening to The Who after Face Dances, the 1982 album It´s hard never caught my attention because I thought it wasn´t good enough back then. But since the years went by, I slowly started to like it more and more. And after reading The ultimate music guide to The Who with 148 pages of wonderful reading, I have listened quite a lot to this album and really think it´s a great album where the singles "Emminence front", "Athena" and "It´s hard" stand out but also the Entwistle song "Its your turn" is very good with some exceptional drumming from Kenney Jones. This is without doubt one of the most overlooked The Who albums where the band hardly ever play any songs live from but I think they should add "Cooks county" to their live shows, it would do just fine along with their classics. The ballad "One life´s enough" bring tears to my eyes thinking this is the last album featuring Kenny Jones and the superb bassplayer John Entwistle. What a band!