The Who - My Generation 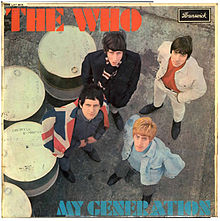 I was way too young when The Who released their first album My Generation in 1965, I was born the year before and didn´t know much about music until I was 10 years old and discovered bands like Status Quo, Slade, Sweet and Kiss. It would take few more years before I noticed how great The Who really was. In 2007, I got to see The Who for the first time and even if Pete Townshend and Roger Daltrey were the only remaining original members - the show would become one of the best concerts I´ve been to. And if we turn back the time to 1981, another of my favorite shows on TV was The Who at Rockpalast from the Face Dances tour.
The rocknroll myth include drugs, booze, women, tragic deaths, smashing amps and guitars, crazy parties and loud shows. The Who lived it all, they were the opposite to The Beatles and The Rolling Stones. The Who were the bad boys of rocknroll, sure they made pop songs but they were lot more wilder than the Beatles and Stones together. I think you can call it hard pop with an edge, songs like My Generation and The Kids are alright from their first album are forever classics. But I cannot see why they included 3 covers of songs by James Brown and Bo Diddley when they left out songs like I can´t explain and Substitute that were only released as singles. It´s not of their best albums but it´s a great start of a long career.
Keith Moon was probably the most insane drummer on earth but also one of the absolute best, he was right when he walked up to Daltrey for the audition, Daltrey looked at Moon and said "-why should we listen to you?" where Moon answered "-I´m better than the one you have".