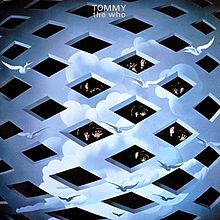 The Who kept releasing non album tracks as singles between the albums because their American contract forced them to release a certain number of records, after The Who Sell Out in 1968 they recorded and released the song "Magic bus" which was a minor flop. Pete Townshend was pretty tired of The Who being a 3 minute pop singles band so he started writing on a rock opera with the working title "Amazing journey". The theme was about a deaf, dumb and blind boy who has dreams and sees himself as the ruler of the cosmos. A new era for the band was about tostart but John Entwistle feared that the albumwould be labeled snob-rock, fortunately he was wrong and it became their most successful album so far.
Tommy, as it was officially called has sold more than 20 million copies til now and is considered to be one of The Who´s best albums. The double set features great songs like Pinball wizard, See me Feel me, 1921, Amazing journey, I´m free and Sparks. Now that ain´t bad coming from a guitar player that smashed 70 guitars a year. I think you could say they were ahead of their time, plenty of rock operas have been recorded since but Tommy is where it all began. 40 years later, it is still sounding just as good.