The Who - Who are you 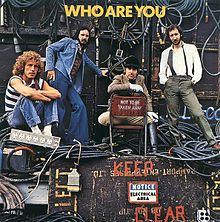 The Who was slowly drifting apart as a band after the 75 album The Who by numbers, Moon had moved to the states and Daltrey was busy with his solo career. But the punkrock explosion in 1977 got the band back on it´s feet again and returned with renewed energy to record Who are you, it was also the return of the synthesizers in anthemic songs like "Sister Disco", "New song" and "Who are you". As a matter of fact, I think of this album as a twin sister to Who´s next from 1971. For the first time since 1967´s The Who sell out, Entwistle provided 3 songs for the album with great songs like "905", "Had enough" and "Trick of the light" where two ended up as singles. Townshend wrote the beautiful "No road romance" for this album but it was rejected by the band, the demo was included on the remastered CD version in 1996. On the tragic side, this was the album with Keith Moon, he died from an overdose 3 weeks after Who are you was released. Truly one of the best rockdrummers ever lived!