The Who - The Who By Numbers 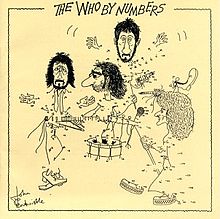 The Who - The Who by numbers (1975) Polydor Records
Produced by Glyn Johns
ROCK
Tracks : 1.Slip kid 2.However much I booze 3.Squeeze box 4.Dreaming from the waist 5.Imagine a man 6.Success story 7.They are all in love 8.Blue, red and grey 9.How many friends 10.In a hand or a face
www.thewho.com
3,5 out of 5

Back to the guitar oriented, "no rock opera but just simple" pop/rock songs on the 1975 album The Who By Numbers. At this time, almost every member of the band did solo albums with Moon releasing his debut solo Two sides of the moon and Entwistle did Mad dog the same year while Daltrey was filming Lizstomania. There was quite a tension between Townshend and Daltrey before doing The Who By Numbers and some fans feared this would be the last album from the legendary four. They had 2 hits from the album with "Slip kid" and "Squeeze box" but the band hardly ever play any songs from By numbers live, there are a few really good songs on this album such as "Dreaming from the waist", "How many friends", "Success story" and "However much I booze". I admit I didn´t like the album that much back then but I have learned to love it later on.