The Who - The Who Sell Out 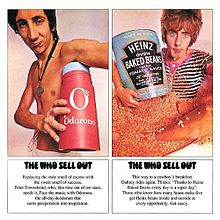 Producer Kit Lambert started his own label Track Records and signed The Who as the first signing with Jimi Hendrix as the second, with two hit records you should think all things were looking good for the band but they were deep in dept. Around £40.000 which in today´s earning would be £1 million, and by October 1967 they only had 4 songs for their next album The Who Sell Out. Kit Lambert told the band they had a deadline in Nov so Townshend quickly wrote the remaining tracks and by Nov 22nd the record was mixed and ready.
The Who Sell Out is their most experimental record, some of the songs could´ve had Syd Barrett as the composer. Very psychedelic. The album only features Daltrey onlead vocals on 4 tracks, Entwistle handled 2 with Townshend doing the rest. It is also their least successful because it only reached #14 in U.K and featured one hit single "I can see for miles", that song is however a true classic. I never was a fan of this record but looking at it today, I think it´s ok.