Lots of Love - From the start 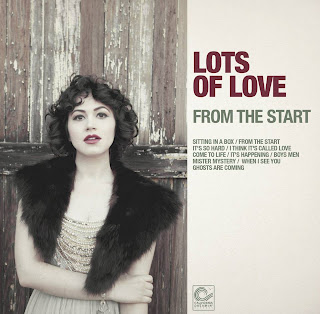 Lots Of Love - From the start (2013) California Dreamin Records
Produced by Robert Schwartzman
INDIE POP
Tracks : 1.Sitting in a box 2.From the start 3.It´s so hard 4.I think it´s called 5.Come to life 6.It´s happening 7.Boys men 8.Mister mystery 9.When I see you 10.Ghosts are coming
www.facebook.com/lotsofloveband
3 out of 5

Jessica Fleischer aka Lots of Love, is a talented singer/songwriter from Los Angeles with her debut full length produced by Robert Schwartzman of Rooney. She´s influenced by 60´s and 70´s pop with artists like The Beatles, E.L.O and Ronnie Spector. You can add a touch of Fleetwood Mac and Nina Persson of A Camp in her sound as well. Jessica has a really unique voice and I find songs like "From the start", "It´s so hard" and "Boys men" very enjoyable. The production from Schwartzman bring thoughts to Jeff Lynne´s work with Traveling Wilburys, just listen to "Boys men" and you´ll know what I mean. My favorite track is "Mister mystery" that could´ve been written by Ron and Russel Mael of The Sparks, what a lovely tune.