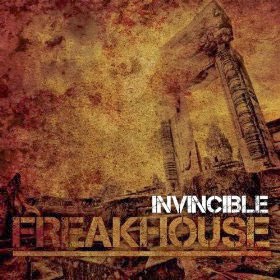 Freakhouse - Invincible (2013) Reality Entertainment
Produced by Freakhouse
ROCK / METAL
Tracks : 1.Invincible 2.Best of me 3.Keep the dream alive 4.Forever 5.Stay 6.Freak like me
www.freakhouse.com
4 out of 5

The L.A based rock band Freakhouse are in no hurry in releasing new music whenever a new record´s out, I got to know this band with their 2nd LP "Beautiful misery" in 2003 that can be described as an industrial metal album in the same vein as Static-X and White Zombie. It took 5 years for the band to record the follow up "Freakhouse" that was released in 2008, their latest "Invincible" EP came out last year and it´s without doubt their strongest effort so far.
The new 6 track EP is really melodic and less industrial oriented even though there are some traces of their early sound in a few moments, there´s no arguing in these new songs being the perfect match for WWE. The macho-factor is high in songs like "Best of me", "Forever" and the title track "Invincible".
But what about the killer chorus in "Keep the dream alive", a true knockout!
Well done!
Upplagd av RothNRoll kl. 10:49 AM