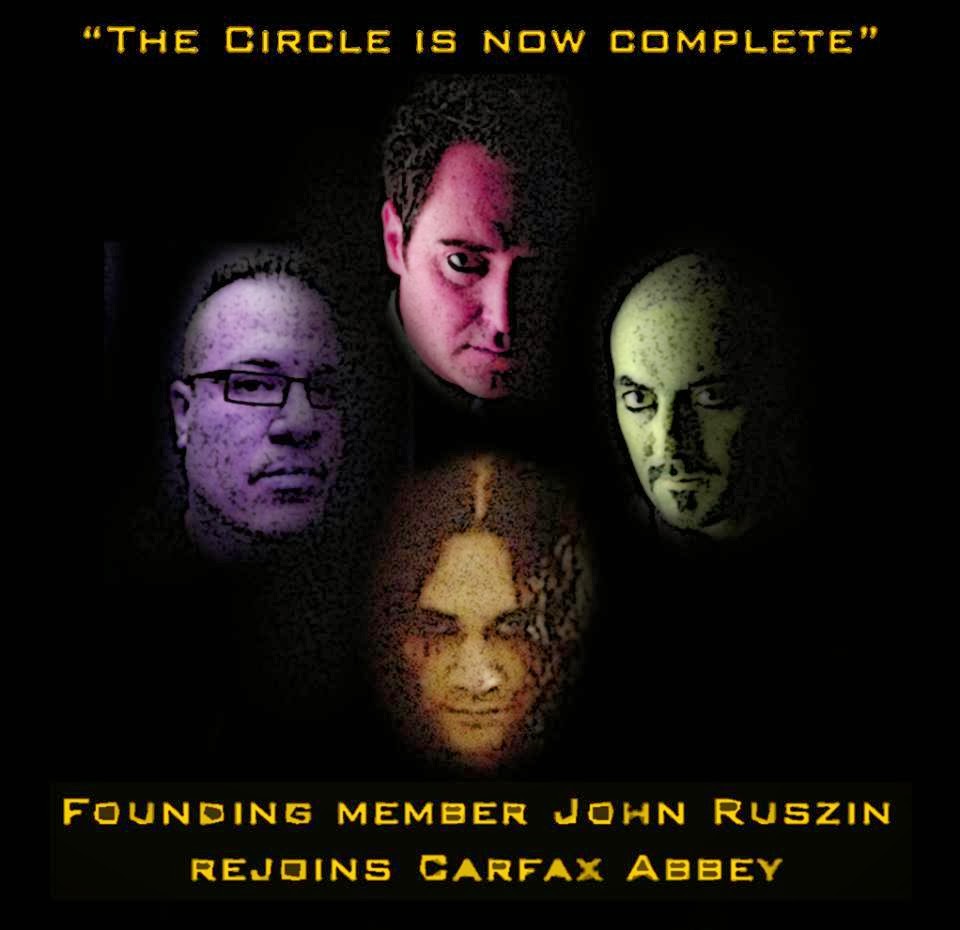 Philadelphia based goth rock band Carfax Abbey should be playing arenas around the world if there is any justice in this world, their biggest hit is an awesome rendition of the superb Lost Boys OST song "Cry little sister" and the band has delivered 4 really cool albums where the latest "Caustic revolution" shows the band from a new side soundwise.
Frontman Gary Billings was kind enough to give the readers of Palace of Rock a look at the up´s and down´s of the band, his personal life with rehab and the time when the father of "Cry little sister", Gerard McMann contacted Gary for a possible collaboration.

Hi Gary, can you tell me a bit of the line up of Carfax Abbey. Who are the members?

G: John Ruszin III on guitar, Noel Conklin on bass, David Giuffre on keybords/synthesizers and sequencing, myself on vocals.


Have the line up been intact since the formation in the late 90´s?

G: The current line-up is as close to the original as it has been in over nine years. David Giuffre, John Ruszin III, and I are three of the founding members. David rejoined a few years ago, and John just officially rejoined this month.


Are you the main songwriter in the band?

G: No, we all contribute. My primary focus usually is lyrical content, but, David contributes in that area, as well. Our latest recording, “Caustic Revolution” was written by Noel, David and I. I think collaboratively, it is our best recording.


American gothic (1999) is the title of the first demo album from CA, and it´s also the name of one of my favorite TV series from 1995 by Sam Raimi.
Did you get the name from the CBS series?

G: I actually had to ask our guitarist this question, because until a few weeks ago, even I didn’t know the answer. Apparently, John felt that a lot of “Gothic” music originated from the UK, so he didn’t want listeners to be confused. He wanted people to know that Carfax Abbey and the recording itself were all made right here in the states. 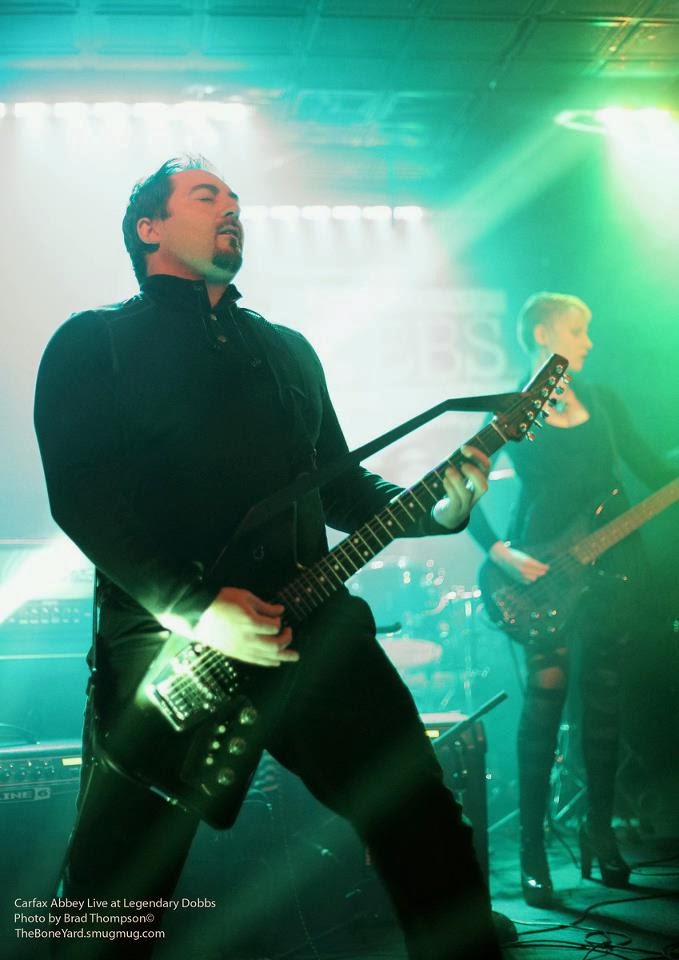 Two of the songs were re-recorded for the official debut a few years later, "Spitshine" and "Ketamine", and I like the menacing sound on "American gothic" which is typical for CA.
Dark, suggestive and electronic based rock that sounds like it´s handmade for the Underworld Soundtrack albums. How do you feel about your first album today?

G: I can wholeheartedly say that I couldn’t be more proud of that album. It was a time when we were extremely raw. We didn’t get caught up in the “flow” of the industry; we weren’t jaded by record labels, and we wrote songs to please us and us alone.

The official debut Second skin came out 2004 and on this album, I think the true sound of CA came alive and you really nailed the cover of the Lost Boys classic "Cry little sister".
In my review at melodic.net, I mentioned influences like Depeche Mode, Stabbing Westward and NIN. Most artists have a special bond to their official debut album, what are your thoughts about Second skin a decade later?

G: “Second Skin” is still one of our most well received releases. I’m constantly talking to people who tell me how much they love that album. It definitely captures the cohesiveness of the band. That was about the time that we all started coming into our own.


It screams disease from 2007 is the band´s first commercially distributed album on Dancing Ferret Records where you decided to include Gerard McMann´s "Cry little sister" again.
Have you ever been in touch with Gerard and has he heard your brilliant cover?

G: Gerard reached out to me a few years ago in reference to possibly collaborating with him to record another version of the song. Somewhat of a duet, if you will. Within our discussion he told me that he truly admires and appreciates our version of his song. He told me at that time that he has yet to hear a better version. Needless to say, that was flattering. Unfortunately, the collaboration between him and I never came to fruition, but we’ll most definitely take the compliment. 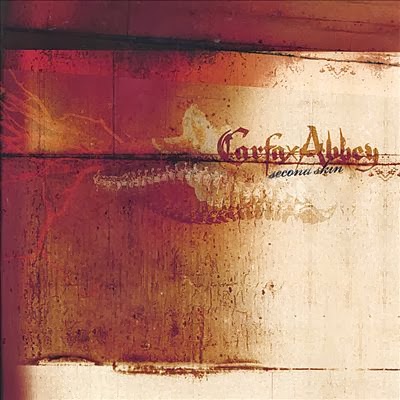 G: Good, bad, or indifferent, I don’t believe it is. As I’ve previously stated, “Second Skin” appears to be the fan favorite. Noel contributed to a few of the songs musically, and I wrote the lyrics to some of the songs but, “It Screams Disease” was primarily written by one individual who is no longer in the band. I believe that any Carfax Abbey album that has primarily been molded by the hands of one member isn’t truly a Carfax Abbey album. It might as well just be a solo album. It was also a time when my active alcoholism/drug addiction was at its peak. I was no good to anyone, especially this band. This is just my bias; I feel that those were contributing factors to an album that could have been so much more.

Your latest release, "Caustic revolution" was released in 2012. Why did it take so long to make a new album?

G: There are a few reasons; the biggest one being the time it took for me to get sober. Shortly after “It Screams Disease” was released, I was on a steady decline surrounding my drug addiction/alcoholism. I went into a long term rehab in late spring of 2008. It was during that time that band was on an indefinite hiatus. We didn’t start entertaining the idea of getting back together for another year. It took some more time and some line-up changes before we decided to start writing and recording “Caustic Revolution”. I can safely say that the time it took to finally start writing and recording again was well worth it.


I really like this album where the song "Are we the only ones" makes you feel like you´re the last person on Earth. But another one of my favorite songs is "Dyatlov" where my thoughts go to Pink Floyd. Can you tell me a bit more about the story of this concept album?

G: Well, first off, thank you. Pink Floyd are a huge influence to David, Noel and I. Anytime we are in the same company as them, things are good. I heard a story about the Dyatlov Pass Incident, which occurred in Russia, during the 1950’s. A group of people went on an expedition into the mountains of Russia. Two weeks later they were supposed to return. They never did. A search party went to look for them, when they came to the campsite of the group, everyone was dead. The truly weird thing is that most of their wounds were internal, there were no external wounds, and most of them were found with hair that mysteriously turned white. Their tents were torn from the inside out and some of them had abnormal amounts of radiation. After hearing this story and doing some research of my own, I felt that a concept album which was influenced by the “End Times” was something I couldn’t walk away from. The album starts with Dyatlov, takes you on a journey of emotions, eventually taking you to the last track, Atypical. This album is one of my all time favorites. 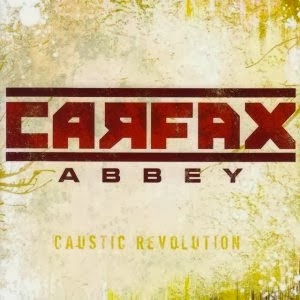 How does the future look for CA, will there be any more albums to look forward to?

G: The future looks like it has a ton of opportunity waiting for us. Having John and David back (two of the founding members), as well as Noel, who has been in the band for 11 years, I am truly looking forward to writing, recording, and performing in 2014. There will definitely be a new album in Carfax Abbey’s future.

Your acoustic solo album "Grey skies" from 2008 is a bit different compared your band´s industrial sound. Are these songs that didn´t fit CA?

G: Actually, the song “Stay” is a song I wrote and recorded for “It Screams Disease”. I decided to use it on Grey Skies. I thought the song was moody enough and showed the same type of emotion that I was looking for on Grey Skies.


Fans of CA of course recognize your unique voice on "Grey skies" but it feels like you wanted to show another side of the songwriter Gary Billings, am I right?

G: Absolutely. Keep in mind, ”Grey Skies” was recorded shortly after I got sober. There was a lot that I was feeling, emotions that I never dealt with before without some sort of substance in me. Coincidentally, it was the same time that David Giuffre re-entered my life. Prior to this, I hadn’t spoken to David since 2004. He came out to see me perform some acoustic songs in 2008, he then offered me the opportunity to record Grey Skies at his studio, Studio Auroviral, which is where “American Gothic”, some of “Second Skin”, and all of “Caustic Revolution” were recorded. He and I now have a standing joke. At that point he played synth on two songs for Grey Skies. Since then, we decided to collaborate further on the acoustic project, calling it “God Shaped Void”. We wrote more songs, performed them at various locations, and even started recording some of them. He made the decision shortly afterward to rejoin Carfax Abbey. We then decided to write and record Caustic Revolution. Now with John Ruszin III back in the band, David and I will look at each other and say, “two songs”. It was two songs that he played synth for me on Grey Skies. At that time, we thought that would be the extent of his involvement…boy, were we wrong.


Do you have any regrets in the history of the band?

G: I believe in destiny, I believe in fate. I believe that we all have a course charted out for us well before we are even conceived. That being said, I believe we have a part to play in how much we alter that course. I can safely say that having John Ruszin III, David Giuffre, and Noel Conklin in this band at this very moment leaves me with no regrets. We all had to make the tough choices, bad decisions, and learn the numerous life lessons that we had to learn in order to get right here, right now. I wouldn’t be where and who I am without that history.


If you could only pick 3 albums to bring to a desert island, which ones would you pick?

I think it´s a mystery why your band isn´t bigger, do you feel it´s a constant struggle to get your music out to the public?

G: Struggle is a state of mind. I don’t see it as a struggle; I see it as a challenge. It’s obvious that how we listen to music as a public has changed tremendously over the past ten years. I get why people would rather download their music for free than purchase it. It’s pretty simple to me, because they can. We started Carfax Abbey because we wanted to make music the way we wanted to make music. We’ve done that, and we still are. All we ever wanted was to be heard. Sure, I would love more of the world to know Carfax Abbey, but I also believe that the final chapter to Carfax Abbey has yet to be written…until then.
Upplagd av RothNRoll kl. 6:56 PM