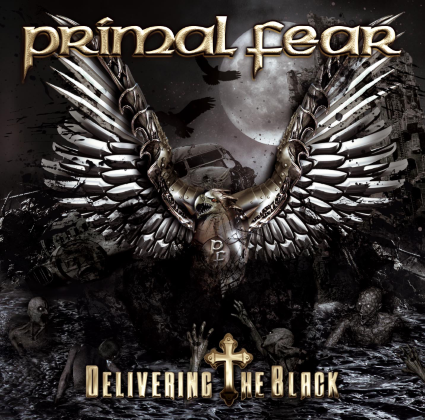 Primal Fear - Delivering the black (2014) Frontiers Records
Produced by Mat Sinner
HEAVY METAL
Tracks : 1.King for a day 2.Rebel faction 3.When death comes knocking 4.Alive and on fire 5.Delivering the black 6.Road to asylum 7.One night in December 8.Never pray for justice 9.Born with a broken heart 10.Inseminoid
www.primalfear.de
3 out of 5

The word black must be one of the most used words in the heavy metal genre and it´s the 2nd time German metallers Primal Fear goes for black in the album title. The first time was "Black sun" from 2002, they continue to deliver bombastic heavy metal on their 10th album "Delivering the black" and the fans will be more than pleased.
Singer Ralf Scheepers says it´s their strongest album so far, you´ve heard it before now don´t you?
Well, this is a good album with the classic Primal Fear sound but it´s hardly a masterpiece nor an album that should be overlooked.
They truly put the pedal to the metal on tracks like the 9 minute long "One night in December" and the epic "Rebel faction", not to mention the new single "When death comes knocking" which is a highlight on "Delivering the black".
And I do enjoy a fine dose of metal that sounds like they´re firing those cannons on a king´s birthday.
Upplagd av RothNRoll kl. 3:32 PM