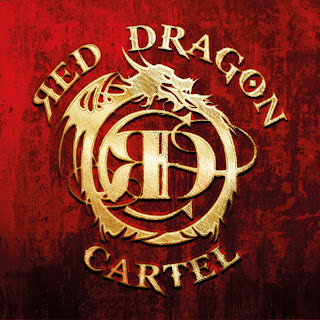 The return of guitarhero Jake E Lee in the hard rock genre and what a great return it is!
Jake formed a new band called Red Dragon Cartel together with bassplayer and producer Ron Mancuso from Beggars and Thieves, former Harem Scarem drummer Darren Smith on lead vocals and drummer Jonas Fairley.
The debut album also feature guest performances from Pantera bassist Rex Brown and singers Robin Zander (Cheap Trick), Paul Dianno (ex.Iron Maiden), Maria Brink (In this moment) and Sass Jordan.
Soundwise, RDC could be the album Ozzy should´ve released after The Ultimate Sin instead of No rest for the wicked if Jake E Lee had stayed with Ozzy.
I love the big production and Jake is playing the six strings with the same attack as he had on Bark at the moon, I really do hope this won´t be an one album band because I truly wanted to hear more from RDC.
The first single "Feeder" is excellent but also thumbs up for the glowing riffrocker "Slave", not to mention the epic "Fall from the sky". They rock!
Upplagd av RothNRoll kl. 4:38 PM