W.E.T - One Live in Stockholm 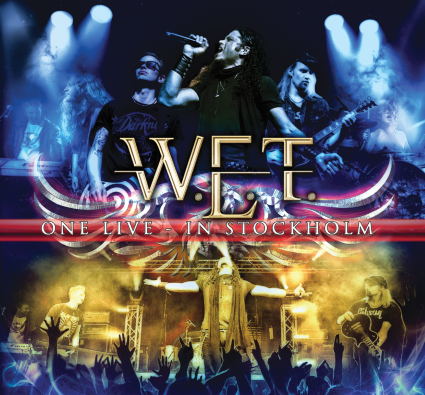 The debut gig from W.E.T actually took 4 years after their self titled first album from 2009, to take place in Stockholm on January 17th, 2013.
It was recorded and will be released on both 2 CD´s and a DVD this week, the band performed songs from their two studio albums along with some favorites from their other bands Work of Art, Eclipse and Talisman. These live versions are definitely more hard rocking than the polished AOR sound on their studio albums, it´s nice to hear they pull off "Bleed and scream" from Erik Mårtensson´s Eclipse and "The great fall" from Robert Säll´s Work of Art. But I´m not too overexcited to hear that old Talisman hit "I´ll be waiting" even though the crowd loved it.
What I do like about this live album are the brilliant versions of "Love heals", "If I fall", "Brothers in arms" and the heartfelt "Comes down like rain" which is dedicated to Marcel Jacobs.
As a bonus we get two unreleased tracks from the "Rise up" sessions, recorded in 2012. The rocker "Poison" that sounds like something Talisman could´ve released and the powerballad "Bigger than both of us", a solid song for sure.
"One Live - In Stockholm" is a must for W.E.T fans.
Upplagd av RothNRoll kl. 1:32 PM