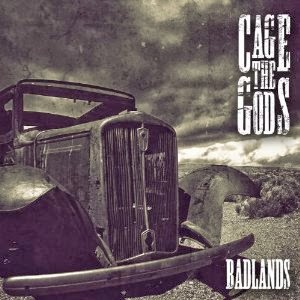 Cage The Gods - Badlands (2014) The End Records
Produced by Cage The Gods
ROCK
Tracks : 1.Favourite sin 2.The ending 3.Sacrifice 4.Badlands 5.Trouble reigns 6.Bruce Willis 7.Falling 8.A thousand times 9.One more taste 10.What´s left of me 11.Promises 12.From the start
www.facebook.com/CageTheGods
3,5 out of 5

A little bit of soul, a little bit of blues and a lot of timeless rock - there you have it. The hot new British act Cage The Gods truly nailed it on their debut album "Badlands", where the members are from all parts of the British islands namely Ireland, Scotland, Wales and England. Cool!
They are influenced by classic bands like Aerosmith, Led Zeppelin and Bon Jovi. Ohyeah, it´s time to play some airguitar again.
CTG released their first "Favourite sin" EP last year and 3 tracks from the 4 song EP are included here, we also get the supermelodic "Falling" and the U2-esque rocker "Promises" which is a highlight. Fans of Little Angels and Toseland are in for a treat here with songs like "Badlands" and "Trouble reigns".
Great album!