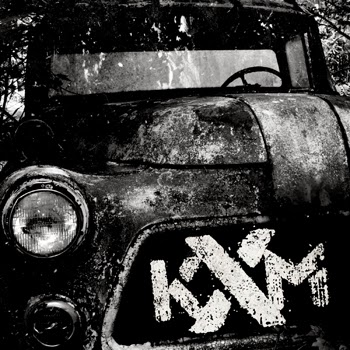 It´s time to clean the flooded charts of mainstream pop with some kick ass rock, let´s bring in the lynch mob and chase away the posers with some serious riffin´.
Who you´re gonna call? Well, not the ghostbusters because they´re not around anylonger so the guys we need should know rockmusic like their backyard. And here they are, KXM!
Ray Luzier, the amazing drummer of KoRn, dUg Pinnick, a legend in his own time and the frontman of Kings X, George Lynch, the great sixstringer that needs no introduction.
This trio started jamming in 2013 with no plans of starting a band or making a record but they got along well and the songs kept coming, so now they´re label pals with Metal Church, John Corabi and Pamela Moore on Rat Pak Records with a brilliant debut album out now.
Pinnick´s been rather busy the last year with the solo album "Naked", the Pinnick Gales Pridgen album and now KXM that is even heavier than the ones mentioned.
So how does the album sound like? In fact, KXM is the result of a combination between Lynch Mob, Kings X and KoRn. Pretty much what any fan of these bands have on their wishing list.
Highlights : Stars, Rescue me, Do it now
Upplagd av RothNRoll kl. 6:42 PM