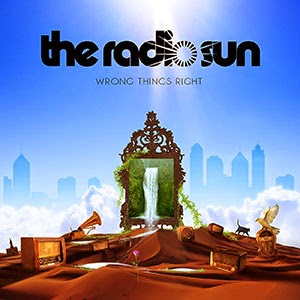 The Radio Sun from Melbourne, Australia might be a new band but they´re hardly newcomers in the business. The core of this band played together in Square One, a really good powerpop band with a couple of nice releases where the 2005 album "Supersonic" was a fave of mine.
When Paul Laine (Danger Danger) mixed The Radio Sun´s debut album "Wrong things right", he was so impressed that he asked the band to be his backing band on the recent tour down under.
You can clearly hear that their influences are taken from the 80´s with artists like Rick Springfield, Nelson and Firehouse but also melodic rock bands like Waltham, Harem Scarem and Marvelous 3.
The vocal harmonies are top notch, I know the guys in Little River Band would be proud over hearing such amazing background vocals on this 12 track album.
If you´re looking for upbeat songs with catchy choruses and edgy guitars, then "Wrong things right" is just what the doctor ordered.
I´m always weak for music that will put me in a good mood and The Radio Sun are truly experts of feel-good rocknroll, the best track is "World´s crazy now".
Highly recommendable!
Upplagd av RothNRoll kl. 9:55 AM