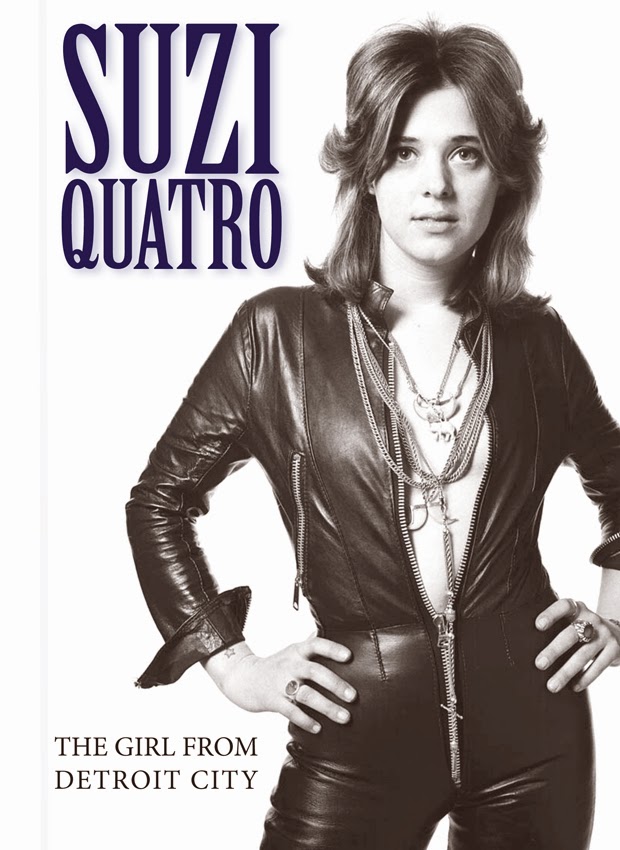 This is christmas for Suzi Quatro fans, the 4 box set "The girl from Detroit city" including all her hits, b-sides, rarities and the new single "The girl from Detroit city".
The glam rock queen is celebrating 50 years in the music business with 82 tracks, everything from her early days in the 60´s band The Pleasure Seekers, the Mike Chapman era in the 70´s and lots of interesting cover versions (some never officially released before).
The first disc contains 3 recordings with The Pleasure Seekers where the song "Light of love" stand out, an adorable 60´s pop song.
We also get the classic hits such as "Can the can", "Devil gate drive", "The wild one", "48 crash" and "Daytona demon" where the majority of the tracks are taken from the albums "Suzi Quatro" (1973), "Quatro" (1974), "Your mamma won´t like me" (1975) and "Aggro-phobia" (1976).
The b-side "In the morning" bring thoughts to Status Quo which is cool.

The material on the 3rd disc focus on her comeback albums "Back to the drive" (2006) and "In the spotlight" (2011) but as a bonus, you can expect the two songs "I got the sun in the morning" and "Moonshine lullaby" from the musical "Annie get your gun" which Suzi performed the leading role of Annie during 1986.
The highlights on this disc are Suzi´s tribute to Elvis Presley in the beautiful "Singing with angels" as well as the new track "The girl from Detroit city", the song speaks of her early days in Detroit and her discovery by Mickie Most. The song is written by Mike Chapman but sounds more like a Phil Spector penned tune.
But there are other nice songs too, just take the 1991 single "Baby you´re a star" where it´s easy to understand that Joan Jett has been influenced a lot by Suzi Quatro.

Perhaps the most interesting disc for Quatro fans must be the 4th disc with lots of rarities, unreleased songs, demo versions and b-sides.
The quality feels like a roller coaster ride with both up´s and down´s but I especially like her covers of "Desperado" (The Eagles), "Don´t let me be misunderstood" (The Animals) and "Warm leatherette" (Tom Petty). Her version of "Warm leatherette" can be described as Lou Reed in a new wave mood, what a sexy voice she has.
Suzi Quatro shows no signs of slowing down, she says -When I turn my back on the audience and shake my ass, and there is silence.....I´ll stop!
We love you.