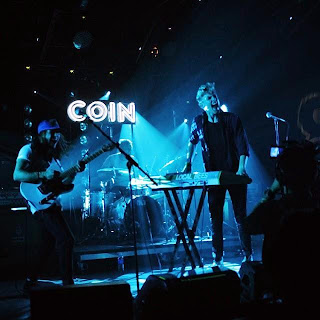 “COIN proudly calls themselves a “product of the ’90s.” This borrowed nostalgia isn’t some burgeoning social phenomenon, especially among Nashvillians. COIN hasn’t adopted the detached smugness and angst common among contemporary ’90s alt revivalists. COIN, instead, opts for earnest songs about actual human emotions: falling in (and out of) love, worrying about the future, and missing the past.


They’ve recently finished writing and recording their debut album in Nashville with 2015 Grammy Producer of the Year nominee, Jay Joyce. The forthcoming album is guitar driven and sonically mature, but still true to their synth-pop sensibilities.”
Coin´s self titled debut album will be out June 9th, listen to the first single "Run" here: