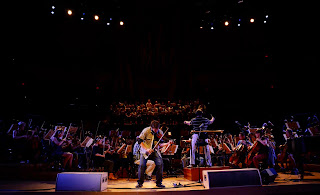 You've almost certainly heard the work of Norwegian composer Thomas Bergersen, even if you don't recall the name. Bergersen has developed a estimable reputation in the entertainment industry for his powerful and evocative instrumental pieces, which have been used in trailers for a number of major motion pictures, including Avatar, Pirates of the Caribbean, Twilight, The Dark Knight, and many more. Bergersen is the co-founder of Two Steps from Hell, a music production company that provides scoring for movie promotional campaigns, and as his work has become better known, Bergersen has branched out into writing and recording music that stands on its own. Sun is Bergersen's second album of original music, following the success of 2011's Illusions, and comprises symphonic pieces in which the composer employs large orchestras and world-class soloists (over 200 musicians took part in the recording sessions) to bring his grand-scale musical visions to life.
Listen to the pompous "Children of the sun" here: