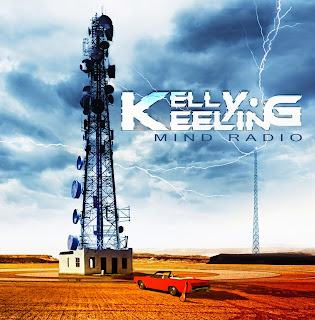 
Amid all these collaborations, Kelly debuted as a solo artist with the album "Giving Sight to the Eye" which was released in March 2005, featuring Roger Daltrey, Denny Laine, Kerry Livgren, Carmine Appice & Tony Franklin. Now in 2015, Kelly Keeling is back with another solo album entitled, "Mind Radio," which is produced by the very-much-in-demand Alessandro Del Vecchio (Revolution Saints, Bonfire, Graham Bonnet, Hardline etc.).


"This album is a culmination of the last 5 years on a journey to revive my old band amidst considerations of not playing music anymore for a while due to a much needed break" says Kelly. "But during the process I found direction, actually traveling and ending up all over the world on tour with Baton Rouge, and as a solo artist at various festivals and venues. This album Mind Radio is very honest, walking the listener through what I endured on this journey. I love my band. Alessandro Del Vecchio! What a genius that guy is. I've produced and been a part of many albums but this guy is so brilliant! What a great musician singer, writer, Producer and Brother to me. I’m so very happy to have him onboard as he surely simplified a focused direction, taking a load of effort off of me through a masterpiece of work which seems to have taken lifetimes to get here."


With songwriting contributions from Robert Sall (RIDE OUT THE STORM, FROZEN IN TIME), VON GROOVE's Michael Shotton, guitarist Mario Percudani and Del Vecchio himself. Musically and sonically, this is a brilliant Melodic Rock album showcasing the impeccable vocal talents of one of the most underrated Hard Rock singers of our time. Also included on the album are three songs written by Keeling together with his BATON ROUGE cohorts Jack Ponti and Lance Bulen (WRITTEN IN FIRE, MONKEY HOUSE and WHO DO YOU RUN TO).