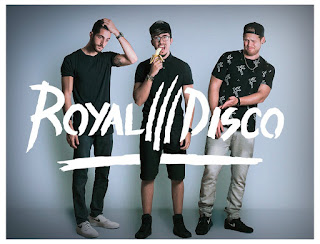 After taking almost a year long break, Tel Aviv trio Royal Disco is back and better than ever with their new EP titled Dark Energy, available now on Beatport, iTunes, and Spotify via Buygore.  Beginning with their EP titled "Dark Energy", you're welcomed into a spatial, atmospheric void filled with melodic keys as you're  bombarded with sawing laser-esque synths and deep sub bass and thrown down the worm hole that is Dark Energy. As you begin to come up from said ride, you're greeted with soft horns and canorous keys as "Sensei" begins. Just as quick, you're smacked in the face with an aggressive hook as you nose dive into a bass laden drop filled with unsympathetic synths leaving you hyped and wanting more. Luckily, there's one last hill to climb as the final track "Welcome to the Universe" beings with an epic drum intro leading into electro keys, reminiscent of an old John Hughes flick. The harmonious vocals uplift the track, then gets torn back as you fall into merciless drop after drop.