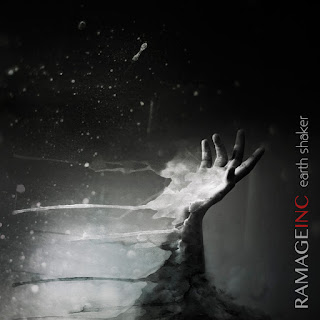 Ramage Inc - Earth shaker (2015) A dark landscape of numetallic riffs
There´s a new carrier arriving at the internet harbor, loaded with metal missiles and heavily armed jet planes of bombs with killer riffs. It is marked Ramage Inc on the side and when you feel the earth shake, it´s not an earthquake - it´s the brand new album from Scottish band Ramage Inc.
Their first album "Feel the waves" was released in 2013 and this September, it´s time to unleash some new doom-ish metal with traces of prog and the smart thing to use a church choir on some tunes.
Imagine one bit of KoRn, some Enochian Theory and plenty of Devin Townsend and you´ll get "Earth shaker", the downtuned riffs are at centre here and they never stop, they just keep going and going and going.
So Lady Gaga thinks she´s the next Iron Maiden, well I bet the boys of Ramage Inc has a thing or two to say about it.
When you want to get rid of the pop in your head, just get some of this and you´ll be free.
Massive stuff. 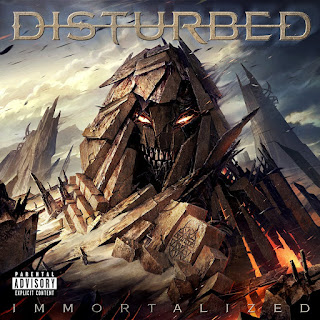 Disturbed - Immortalized (2015) Home-field advantage for the presidents of modern metal
I´m so glad Disturbed decided to return after they went into hiatus in 2011, the members have been busy during this time with new projects and bands like Device, Fight or Flight and Art of Anarchy.
But it hasn´t been the same without the offensive metal when they join forces as Disturbed, they secretly recorded their comeback album over the past year and it´s the first album since "Asylum" from 2010.
This time they worked with producer Kevin Churko who has done albums such as "Scream" and "Black rain" with Ozzy because the band felt they needed some new ideas for the new album, but it sounds just like a typical Disturbed album. For better or worse.
Perhaps the guitars reminds a bit of the Ozzy albums but with Draiman´s voice and their trademark of staccato oriented riffs, this is nothing more than a homebase album.
It was a long shot to see and hear the Simon and Garfunkel cover "The sound of silence" but they do it good so thumbs up, the single "The vengeful one" stand out and so do the melodic "The light".
Welcome back! 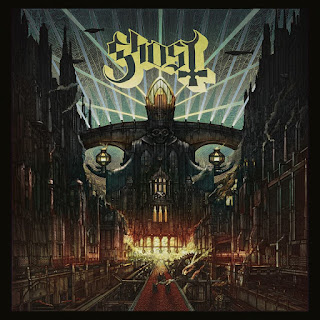 Ghost - Meliora (2015) There´s someone at the door
Papa Emeritus III and the nameless ghouls nails it on their 3rd psalm "Meliora", I knew this album would be huge by the first four tracks I heard. "Cirice", "From the pinnacle to the pit", "Absolution" and "Majesty". And with the entire album filling up the room in my apartment, I instantly got new favorite tracks with "He is" and "Mummy dust".
Black to the future or not, Ghost must have the coolest image in the rock business since Kiss conquered the world in the mid 70´s, Ghost definitely is a bright hope of theatrical horror rock.
The new masterpiece sounds like it has it´s roots in albums like Demon´s The Plague, Blue Oyster Cult´s Fire of unknown origin and Alice Cooper´s Welcome to my nightmare.
I can´t say I was too much of a fan of this band before I saw them live as an opening act before Foo Fighters this summer, they truly won me over with their requiem-like metal.
Mind-boggling! 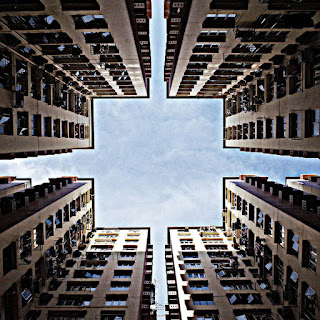 Madam Adam - Rite of passage (2015) The time machine is set for 1997
South Carolina based alternative rock band Madam Adam released their self titled debut in 2011 and took a brief hiatus, then they came back and recruited guitarist Alan Price (Call Me No One) to start working on their 2nd album.
Lead singer Scott Gould and Co are hot on the heels with their new album "Rite of passage" where they line up a strong set of 90´s modern rock in the same vein as Saving Abel and Aussie band Strangers, or why not a more polished Queens of The Stone Age.
Not much has changed as you can see if you´re familiar with their first album, the performance is highly professional and the production leaves the average active rock listener with nothing more to wish for.
A safe buy for fans of this genre but if you want a musical experience with surprises, move on.
Best track : "Mora".