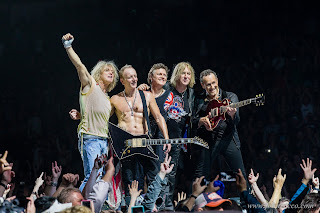 Powerplay - All those years (SEPT 4)
The comeback album after a 20 year long hiatus from the Danish AOR/Westcoast band, sounds like it could be something for the fans of Michael Learns To Rock.

C.O.P - State of rock (SEPT 25)
A new cool band including 3 members of Swedish pomprockers Grand Illusion, a safe buy for the AOR minority.

The Radio Sun - Heaven or heartbreak (SEPT 25)
2nd album from the Aussie powerpop/melodic rock band, their debut was quite good so why not.

Ozone – Self defence (SEPT 25)
More or less a studio project than a band, produced by Mike Slamer, with lead vocals by Chris Ousey (Heartland) and Steve Overland (FM). The true AOR nerds are jumping high of joy.

Bryan Adams - Get up (OCT 16)
First album of new original music since the 2008 album 11, let´s forget about the covers album Tracks of my years from 2014. The new album is produced by Jeff Lynne (E.L.O) which sounds interesting.

Def Leppard – Def Leppard (OCT)
Not much info from the band regarding their 11th studio album more than it´s the first album to feature lead vocals from all members of the band and it´s their best album in 23 years according to the band, we can´t wait to hear it!