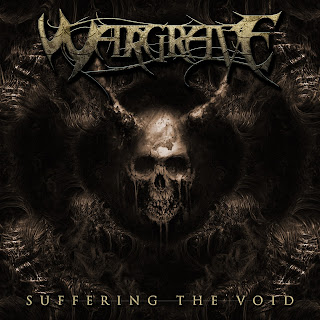 Wargrave - Suffering the void (2015) Independent
Produced by Heinrich Kollner
THRASH METAL
Tracks : 1.Blood on the hands of the holy 2.Delusions of grandeur 3.From the shadows 4.Mutual enemy 5.Tortured beyond recognition 6.A damaged fortress 7.Suffering the void 8.Blind to the light
www.facebook.com/WargraveBand
3 out of 5

A question you have to ask yourself when pop music is all over charts in almost every corner of the world, is metal dead?
It might look that way but it cannot be further from the truth because metal is in a very healthy state, new bands keep poppin´ up all the time and we all know that metal fans are the most loyal fans in the world. When pop freaks rather stream their music, metalheads continue to support their bands and buy the records.
Metal music is also the real deal, when pop artists perform live they just cannot do it without pre-recorded backing tracks. If you want it 100% live, go and see a metal band.
For starters, here is a band from Cape Town, South Africa that lives by Manowar´s motto "Death to false metal".
The roots of the band lie deep in 80´s thrash metal, Wargrave knows the importance of a tight rhythm section and razorsharp guitar riffs in this genre. Their debut "Suffering the void" sounds like it could´ve been released in 1985. Without doubt a well performed album that deserves a better fate than a forgotten release noone heard about in 20 years.
Highlights : From the shadows, Blind to the light
Recommended if you like Metal Church, Anthrax, Slayer