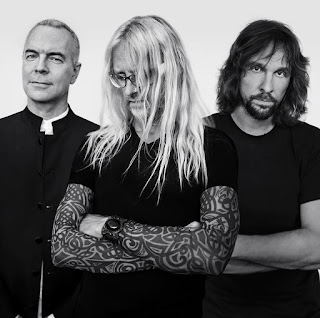 The Mute Gods - Do nothing till you hear from me - JAN 22
We´ve got a new supergroup on our hands with stick player Nick Beggs, drummer Marco Minnemann and keyboardist Roger King. Their CV´s includes Steve Hackett, U.K and Steven Wilson. This has every chance of becoming a modern prog classic.

Steven Wilson - 4½ - JAN 22
One of the classiest artists in the progrock genre releases an album of songs that didn´t make it onto his previous solo albums as well as Porcupine Tree. The expectations are high.

Wigelius - Tabula Rasa - JAN 29
2nd album from the Swedish AOR band that promises an 80´s rock album with a modern twist. Should be interesting.

Grand Slam - A new dawn - JAN 29
No it´s not Phil Lynott´s old band reuniting for a new record, these guys are Vikings from the southern parts of Sweden. The new home of melodic rock and Grand Slam ain´t no exception.

Rick Springfield - Rocket science - FEB 19
The marathon rocker shows no signs of slowing down and keeps a steady pace at releasing albums in a 4 year run with Shock Denial Anger Acceptance (2004), Venus in overdrive (2008), Songs for the end of the world (2012) and now yet another classic Springfield album that will make fans happy.

Magnum - Sacred blood, divine lies - FEB 19
18th studio album from the British pomprock gods, the only question is if Tony Clarkin and Bob Catley still can deliver since they´re almost as old as Gandalf.

Rage of Angels - The devil´s new tricks - FEB 26
The 2nd album from this melodic rock project that is said to be more commercial than the debut with former members of Ten, Saga, Final Frontiers, Coldspell and Tyketto.