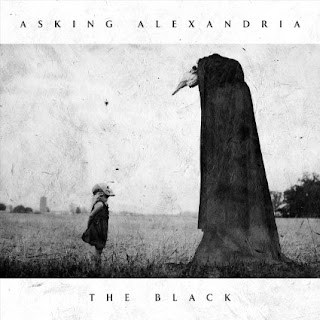 Asking Alexandria - The Black (2016) Sumerian Records
Produced by Joey Sturgis
METALCORE
Tracks : 1.Let it sleep 2.The black 3.I won´t give in 4.Sometimes it ends 5.The lost souls 6.Just a slave to rocknroll 7.Send me home 8.We´ll be okay 9.Here I am 10.Gone 11.Undivided 12.Circled by the wolves
www.facebook.com/askingalexandria
4 out of 5

Every new album for Asking Alexandria is a challenge, they always seem to have an eye for development and still they´re trying to maintain their strong foundation of modern metal.
The band stated they were influenced by bands like Guns´n´Roses, Van Halen and Avenged Sevenfold when they wrote songs for the new album "The Black". Although I can´t say I hear any traces of 80´s rock in the new songs.
It´s the first album to feature new frontman Denis Stoff (ex.Make Me Famous), he replaced Danny Worsnop who left the band in 2015 to form the hard rock group We Are Harlot.
It´s cool to see that there is no bitterness between the former frontman and the band, Worsnop recently wished them well and was glad to see they are still on fire with the new singer.
"The Black" is the Sgt.Pepper´s of metalcore, with an innovative sound but still compact enough to satisfy the most demanding metal fan. The choruses have a big "30 Seconds To Mars" sign over them and the music is as heavy as any Sevendust riff.
A blockbuster album!
Highlights : The Lost Souls, Send me home, The Black
Recommended if you like Crossfaith, Bring Me The Horizon, As They Burn