Review : The Phoenix - My turn to deal 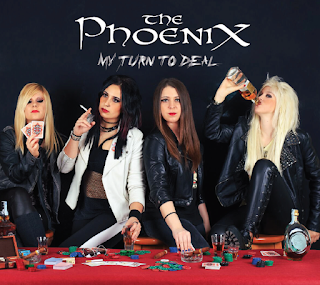 The Phoenix - My turn to deal (2016) Demon Doll Records
Produced by The Phoenix
HARD ROCK
Tracks : 1.My turn to deal 2.Dangerous girl 3.You can´t stop the rock´n´roll 5.Party hard
www.facebook.com/Phoenix.Female.Rock
3 out of 5

The Phoenix are an all female rock band from Rimini, Italy. I think their debut EP "My turn to deal" is a solid affair of heavy metal and sleaze/AOR.
The song "You can´t stop the rock´n´roll" isn´t strong enough to defend the genre of rock, quite an ordinary tune I´m afraid. But the title track is a lot better and the following "Dangerous girl" is a really great song with a lovely AOR-ish chorus.
"Party hard" bring back memories of early 80´s NWOBHM and bands like Rock Goddess and Girlschool, an ok track that probably works better on stage than this studio release.
Highlights : Dangerous girl, My turn to deal
Recommended if you like Vixen, Girlschool, Crucified Barbara