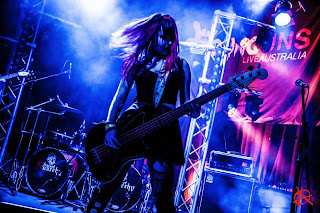 Sweet Anarchy, a young Adelaide heavy metal band aged between 13-17 years old. In 2012 brothers Tyler and Dylan, who were 11 and 10 at the time, met Kristie who was then aged 13, at a Weekend Warriors gig. An immediate friendship and musical chemistry was discovered, and the rest was as they say history. Sweet Anarchy was formed in December 2012, quickly earning the reputation as a must see live act. They have continued to grow and develop both individually and as a band.
Watch their new video Torn Up.