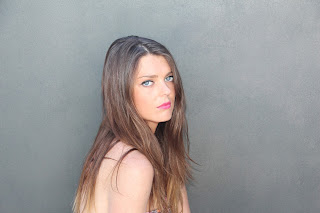 Allie & Ivy is indie electropop singer-songwriter Aleisha (Allie) Conlay, from the sunny northern beaches of Sydney, Australia. Writing songs since the age of 11 and picking up the guitar at 14, Allie was schooled in music at a very young age by her father, a guitarist and record collector from London with a passion for 60s music.

Having developed a deep infatuation with The Beatles at age 11, Allie had dreams to one day front an all-girl rock band called The Ladybeetles but unfortunately never managed to find her Paul, George or Ringo. Not one to let that get in the way of her plans, Allie conjured up alter ego Ivy, giving her the comradeship, confidence and support a real band couldn’t.

Allie & Ivy’s fresh sound and penchant for catchy hooks and infectious melodies have gained accolades both in Australia and internationally. With new songs scheduled for release throughout 2016 and a debut EP underway the year is already shaping up to be a busy and exciting one for Allie & Ivy.