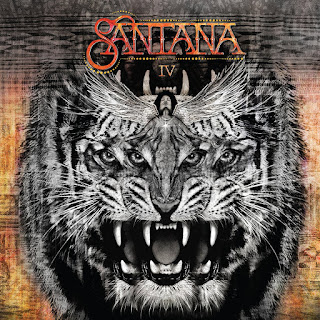 Guitar legend Carlos Santana is one of the most innovative artists on this planet, always looking ahead and never hesitate to try new musical collaborations.
But now timing was right for the classic line up so Santana teamed up with Gregg Rolie - Vocals/Keyboards, Michael Shrieve - Drums, Mike Carabello - Percussion and Neal Schon - Guitar to work on a new album with 16 original tracks.
Few bands can pick up a musical dialog after 45 years apart, but this constellation found the groove right away and the familiar sound of "Abraxas" and "Santana III" is all over "IV".
It´s a good album and fans are buying it like it crazy because "IV" is climbing Billboard´s Top 200 like a rocket, people know real music when they hear it.
The new album might not have a new "Black magic woman" and 5 instrumental tracks feels a bit too much, and I´m also not a big fan of the soul oriented songs "Love makes the world go round" and "Freedom in your mind" featuring guest vocalist Ronald Isley (The Isley Brothers).
But I´m happy to see this line up playing together again and I just have to recommend the overlooked album Abraxas Pool from 1997 without Carlos, that one is even better than Santana IV.
Highlights : Yambu, Echizo, Come as you are
Recommended if you like rhythms