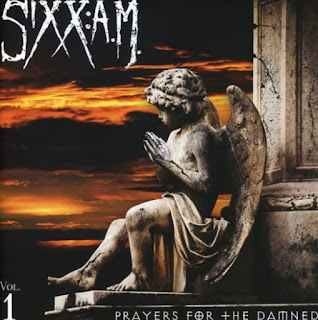 Sixx A.M - Prayers for the damned Vol.1 (2016) Eleven Seven Music
Produced by James Michael
MODERN ROCK
Tracks : 1.Rise 2.You have come to the right place 3.I´m sick 4.Prayers for the damned 5.Better man 6.Can´t stop 7.When we were gods 8.Belly of the beast 9.Everything went to hell 10.The last time 11.Rise of the melancholy empire
www.facebook.com/sixxammusic
4,5 out of 5

What started as a side project is now a steady full time band for Nikki Sixx, D.J Ashba and James Michael. Those who might be a bit worried the band had taken a more poppy direction with the previous album "Modern vintage" from 2014, can now relax because their new album "Prayers for the damned Vol.1" rock harder.
The guitars are louder, the riffs are heavier and the choruses have so much more muscles.
This is their 2nd best album after the impressive debut "The heroin diaries", and looking at the album title, I guess we don´t have to wait that long for Vol.2. Lovely.
Some prefer to travel business class, when you buy Sixx A.M, you travel first class to modern rock euphoria.
Highlights : Rise, Can´t stop, When we were gods
Recommended if you like Shinedown, Track Fighter, 30 Seconds To Mars