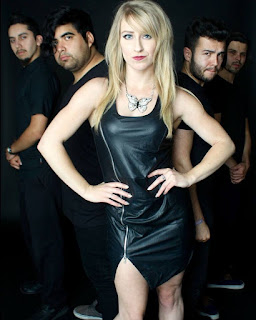 Amanda Gabel grew up going to the magnet art school (The Vancouver School Of Arts and Academics) in her hometown of Vancouver Washington. She then moved to Southern California at age 17 to pursue her dream of becoming a singer. Since living in Southern California Amanda helped Los Alamitos high school show choir win nationals on the Grand Ol' Opry stage in 2010. Since then Amanda Has been rocking stages all over with her band "We're No Gentlemen" at famous venues such as; The Whiskey A-gogo and the House Of Blues to name a few.
Amanda Gabel releases the new EP under her own name but it´s entitled We´re No Gentlemen, including 4 tracks.