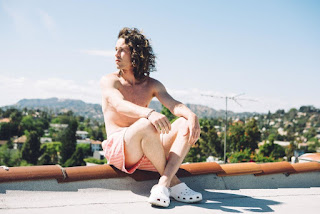 The freshest new vibes coming from the streets of western LA are from rising singer-songwriter and producer, geordie. The “agro-pop” mastermind and postgraduate student at Georgetown University has been maniacally hacking away in his makeshift studio, cultivating a sexual (and sometimes comedic) sonic upheaval unlike any before it.

geordie.’s latest single, “Tastes Like Chocolate,” is about a Caucasian young man who has discovered his budding palate for “less vanilla” tastes. geordie. describes his music as largely autobiographical, and adds, “The song was written about a girl, as is so often the case; the kind of girl you want to celebrate like royalty. A white guy has a crush on this black chick, and he immediately gets this wonderful ego boost because of her mild validation. He thinks he’s the man and that she’s down with him, when in reality she just likes having him around fawning like a puppy.” The song and video clock in at just over four minutes, chock-full of exaggerated flattery and pandering to the new chocolate lady love of his life.