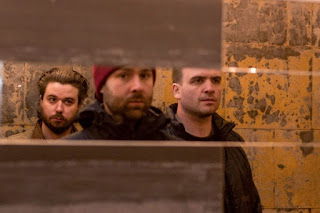 At first Barkhouse was an event, a one-night show designed by Will de Zengotita, to showcase some long hidden material. Will was joined by several musicians that night, including old companions Jay Mort and Olmo Tighe. Ignited by the “Barkhouse” show these three would go on to form a new band of the same name. Even as the writing became a shared endeavor, their songs have continued with the same sincerity and intensity that characterized those first offerings. Now well established in the Brooklyn music scene Barkhouse are set to release Neverdays on May 13, 2016, this is their moodiest and most evocative offering yet. Barkhouse has drawn comparisons to older acts like The Cars and Talking Heads as well as newer bands like Cold War Kids or The Walkmen but hopefully you’ll enjoy finding out for yourself.