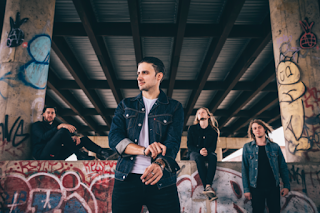 When done honestly, rock ‘n’ roll can stick with you for a lifetime. It rides shotgun for the whole way, soundtracking those big moments and memories. Once you hear a Citizen Zero song, you remember it.

Today, the band arrive with their new single, "Go (Let Me Save You)" premiering exclusively on Guitar World. The song builds from an eerie melody into an overpowering refrain punctuated by an incendiary guitar lead and hypnotic vocal. “It’s actually the first song Sammy and I wrote together,” Josh remembers. “It happened right after the Sandy Hook tragedy. I was watching the news, and I couldn’t believe how the cameramen were consciously filming crying parents. It was so wrong. Having gone through tragedy, it made me really angry. I had to say something.”

The single is the first song from the band since they recently announced that they had signed to Wind-up Records. Their new record, State of Mind will arrive late Summer.