Review : Andy Black - The shadow side 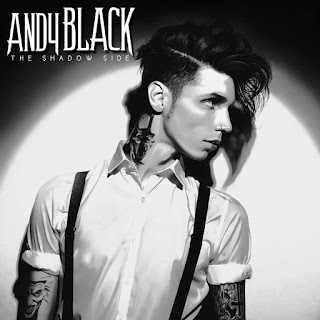 Andy Black - The Shadow Side (2016) Republic Records
Produced by John Feldmann
MODERN ROCK / POP
Tracks : 1.Homecoming king 2.We don´t have to dance 3.Ribcage 4.Stay alive 5.Love was made to break 6.Beautiful pain 7.Put the gun down 8.Drown me out 9.Paint it black 10.Break your halo 11.Louder than love 12.Broken pieces
www.andyblackmusic.com
3 out of 5

Does this pop oriented modern rock record from Black Veil Brides singer Andy Biersack mean that he has left the hard rock sound of his band behind him?
Nah, I don´t think so. Andy has promised a 5th studio album from Black Veil Brides so fans can sleep well at night.
"The shadow side" is the first solo album under the moniker Andy Black and it includes a guest appearance from Matt Skiba (Alkaline Trio, Blink 182) on the track "Stay alive", plus co-writes with Joel and Benji Madden of Good Charlotte.
Andy wrote 45 songs for the album and picked the 12 best songs, or perhaps we should say the most suitable radio ready modern rock songs because in some moments, this album truly sound like OneRepublic with guitars.
It´s a trendy album that sound like a million bucks, but it´s hardly unique.
Highlights : Homecoming king, Beautiful pain
Recommended if you like Daughtry, The Madden Brothers, Nickelback