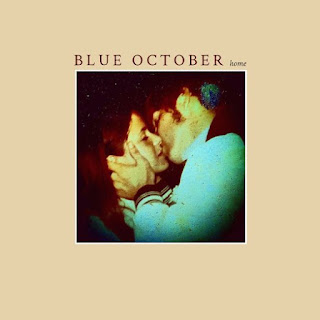 Blue October - Home (2016) Up Down Records
Produced by Tim Palmer / Justin Furstenfeld
ALTERNATIVE ROCK
Tracks : 1.Coal makes diamonds 2.Driver 3.Heart go bang 4.I want it 5.Home 6.We know where you go 7.The lucky one 8.Break ground 9.Leave it in the dressing room 10.Houston heights 11.Time changes everything 12.The still
www.facebook.com/blueoctober
4 out of 5

Blue October most often means top quality and their 8th studio album "Home" is no exception, it has already reached #1 on the independent albums chart in the U.S so there is still hope for rock music in this pop infected world.
The new album shows the band in a softer direction, the songs are more emotional where frontman Justin Furstenfeld opens up in a way we haven´t heard before.
I must admit that it took a few more spins that usual to get into a Blue October album, I wasn´t sure at first that I was going to like as much as I do with their previous releases.
But "Home" grows like the seed in Jack and the beanstalk, so there is absolutely no need to worry because soundwise, these Texans will take you home.
Highlights : Coal makes diamonds, Home, Leave it in the dressing room
Recommended if you like Justin King, Peter Gabriel, The Verve Pipe