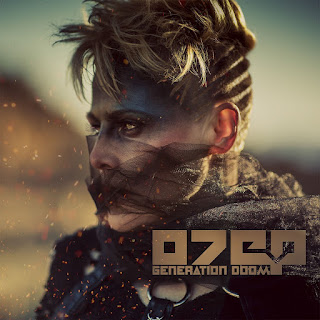 Otep Shamaya closed a chapter with the concept album "Hydra" from 2013 and opens a new chapter with the 7th studio album "Generation Doom".
Let me get this straight right away, this is her best album so far.
"Generation Doom" is a fresh new start with a new band, new label, new power and a new Mad Max inspired image. Ari Mihalopoulos - Guitar (Destrophy) and Justin Kier - Drums have been performing with Otep for a few years now but it´s the first album they lend their talents to.
Otep is a poet and a warrior, like the Nina Hagen of metal, cocky and rebellious. This woman won´t back down and points out some important facts in "Equal rights, equal lefts". Achtung!
The album features a superb cover of Lorde´s "Royals" but it´s her own compositions that stand out here, just listen to the massive "Feeding frenzy" that feels like a caterpillar coming your way.
But the best song is without doubt "Lie", that chorus won´t leave your head for years.
Highlights : Lie, Royals, In cold blood, Lords of war
Recommended if you like KoRn, Marilyn Manson, Strapping Young Lad