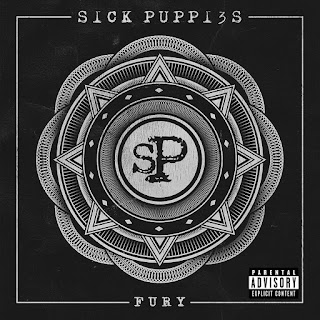 Sick Puppies - Fury (2016) DrillDown Entertainment Group
Produced by Mark Holman
ROCK / METAL
Tracks : 1.Black and blue 2.Stick to your guns 3.Let me live 4.Where do I begin 5.Just the beginning 6.Walls 7.Killing time 8.Earth to you 9.Beautiful chaos 10.If I stay 11.Here with you
www.facebook.com/sickpuppies
3,5 out of 5


"Fury" is the 5th studio album from the Aussie trio and the first to feature Bryan Scott on lead vocals/guitars who replaced Shimon Moore, he left the band in 2014 to pursue a solo career.
20 years of rocking has made the rhythm section of Emma Anzai and Mark Goodwin tight and heavy, so even if some fans will miss Shimon Moore´s contribution to the band, I also believe that their new frontman Bryan Scott is a perfect addition to Sick Puppies´ distinct sound.
"Fury" doesn´t reach the same heights as the previous album "Connect" from 2013, but the new album is another strong landmark in the catalogue of Sick Puppies. It´s a safe buy.
Don´t forget to check out Emma Anzai´s guest appearance on Blue Stahli´s song "Not over til we say so" from 2015. This girl rocks on every front.
Highlights : Stick to your guns, Let me live, Earth to you
Recommended if you like Like A Storm, Setting Fire To Stacey, coldrain