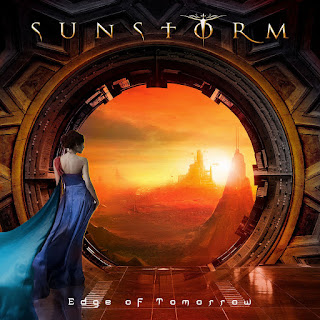 Sunstorm - Edge of tomorrow (2016) Frontiers Records
Produced by Alessandro Del Vecchio
MELODIC ROCK
Tracks : 1.Don´t walk away from a goodbye 2.Edge of tomorrow 3.Nothing left to say 4.Heart of the storm 5.The sound of goodbye 6.The darkness of this dawn 7.You hold me down 8.Angel eyes 9.Everything you´ve got 10.Tangled in blue 11.Burning fire
www.frontiers.it
2 out of 5

I´m a big fan of Joe Lynn Turner´s work in Rainbow, Hughes Turner Project, Yngwie Malmsteen and his 1985 solo album Rescue You.
But no matter how I hard I try to really appreciate the Sunstorm albums, the music just doesn´t move me. It´s this new kind of way of producing melodic rock that I can´t stand, the lines between AOR, powermetal and hard rock has been erased which saddens me.
There´s no room for nuances, everything is cranked to the max.
The 4th Sunstorm album "Edge of tomorrow" is the first not to include producer Dennis Ward behind the steering wheel and instead, JLT chose to work with producer/songwriter Alessandro Del Vecchio instead.
On guitars we find the excellent six stringer Simone Mularoni (DGM) but his contribution as well as JLT`s great vocalperformance cannot save this album. The songs are too predictable.
Highlights : Edge of tomorrow
Recommended if you like W.E.T, Dynazty,Toby Hitchcock