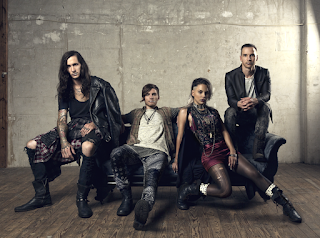 Alternative band VERIDIA from Nashville, TN has released a music video for their latest single "Pretty Lies." The track and video features Matty Mullins from Memphis May Fire and showcases a different side of the vocalist who is better known for his role in the metalcore outfit. The song is the title track from VERIDIA's 2015 EP that debuted in the Top 20 of the iTunes Alternative Albums chart and spent 26 weeks in the top 10 on the Billboard charts with 6 weeks at #1. The imagery of the video aims to dismantle the distorted perception people have of themselves based on what they see on social media and vocalist Deena Jakoub hopes it will help others gain a sense of self-worth.