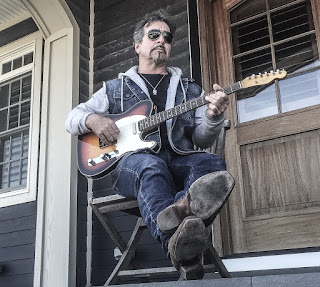 Kenny Dubman goes back to his roots on his first solo album Reckless Abandon but it´s hardly the first album he is credited on, Kenny was the lead guitarist and main songwriter together with Scott Metaxas in 80´s pomp AOR band Prophet.
Palace of Rock thought it would be really cool to have Kenny on board and talk about the new album, as well as his former band Prophet and which town that is the capital of ocean rock. 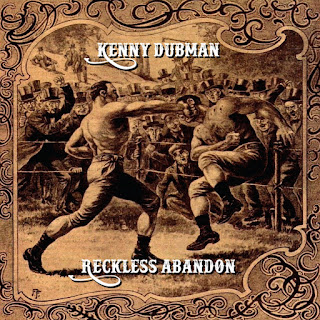 Hello Ken, I must start by asking how many guitars do you own and what guitar is your most precious one?
Kenny-Hmmm..ok....I currently own 7 electrics and one acoustic. The most precious would have to be my 1966 Lake Placid Blue Fender Stratocaster....100% original!

How come it took so long to record your solo debut Reckless Abandon?
Kenny-It actually didn't take long at all, though the sessions had to be spread out over a year due to studio time and financial constraints. If you mean how come it took so long to get around to releasing a solo album after Prophet, that's a loooong story my friends. Let's just say that my passion averted from music for a long while, and that life in general got in the way. It happened when the time was right.

Yeah that´s what I meant.........
You´re not only playing guitar on the album but you are also singing the lead and I must say that you have a perfect voice for southern rock music. How does it feel to take over the lead vocal duties for a change?
Kenny-Southern rock, huh? I don't consider it that, but that's cool. To me, it's earthy, organic hard rock.  It feels great to sing, but I'm only really doing it by default. I wanted to be self-sufficient, so writing for my range let me achieve that.

Who is playing on the album or are you playing most instruments yourself?
Kenny-Eric T. Winnicki, bass
Tony Nardini, piano and Hammond organ
Joe Bellia, drums
Mary Sue Murray, background vocals

I think the music bring thoughts to 70´s rock a la Free meets British hard rock band Thunder. Does these songs on Reckless Abandon reflect your roots?
Kenny-It's totally 70's and it totally reflects my roots! To me, the music that came out in the 70's was the best. I grew up on Stones, Zep, Bad Co., UFO, Priest, Kiss, Johnny and Edgar Winter, Rick Derringer, Black Oak Arkansas, Allmans, Skynyrd, Outlaws, Blackfoot, Queen, Rush, Mahogany Rush, Mott The Hoople, Sweet, Aerosmith, Frampton, Yes, Genesis, Kansas, Floyd....the list goes on. Anything went back then, you didn't have to fit a mold! I love it that people are keying in on the fact that "Reckless" is a full-blown 70's vibe.

It seems like New Jersey natives eat and breathe rock and roll, some of the hottest artists comes from NJ like Bruce Springsteen, Bon Jovi, Franke and The Knockouts, Skid Row, The Gaslight Anthem and Prophet. Is NJ the capital of heartland rock?
Kenny-Don't forget Zakk Wylde! Actually, NJ is on the coast, not in the heartland...so I'd say it's the capital of ocean rock, hahaha! NJ is definitely a hotbed for rock artists, though the volume that comes out of here may be just a numbers game...there's a helluva lotta people packed into this little state! It's an awesome place, though because it's close to NYC, people tend to be a little more jaded. You go west or south of here, and rock n roll seems to be a little more readily embraced by fans.

I read that in the 90´s you joined the Rocket 88 Blues band, are you credited on any albums or did you only play shows with them?
Kenny-Rocket 88 was formed strictly as a cover band to just go out and kick ass. Tony and Eric that played on "Reckless" are in Rocket with me, we still play here and there for kicks. It's ripping live band that melts faces. Mostly at benefits; we just came up with an aka of "The Band That Plays For Free". 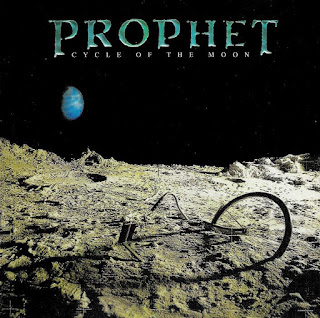 Prophet did a reunion show in 2012, wasn´t it weird to perform without the late Joe Zuikowski on keyboards?
Kenny-Prophet has done may shows since Joe's passing. Joe was a monster player and a larger-than-life personality; one of the funniest dudes I've ever known. EVERYONE loved Joe. It was weird at first, but you get used to it. Life goes on. I still miss him, we all do.

Do you still have any contact with former Prophet members Scott Metaxas, Russel Arcara, Jim Callahan and Ted Poley?
Kenny-I do, and happily still call all of them my friends. Arcara, if you read this, you're still a douche!! Ted Poley actually gave me a bunch of tips when I was about to release "Reckless" on how to make a million dollars as an independent artist. "Start with 2 million", he said.

It´s been 25 years since Prophet´s last album Recycled (1991), ever had any plans of making a 4th Prophet record?
Kenny-Highly unlikely but never say never. All of my creative energy goes into writing songs for myself as a solo artist now, but there may came a day when I want a break and would be open to it.

What 3 albums would you bring to a desert island?
Kenny-Pink Floyd, "Wish You Were Here"
Blackberry Smoke "The Whippoorwill"
Black Sabbath "Sabotage"

Finally, my favorite track on Reckless Abandon is the 2nd track Devil´s brew. What song or songs are you most proud of?
​Kenny-Always tough to pick a favorite out of all your children......but I lean toward "Memphis", "Devil's Brew", "Colt .45", "Wolf", and "Sunset Serenade". I hope I don't hurt the other's feelings!
Upplagd av RothNRoll kl. 9:07 PM