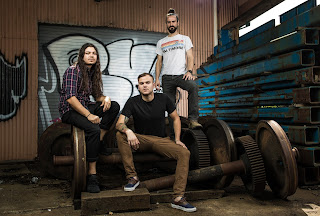 No, it´s not a troll or a brand of shoes and you will probably never read about a hurricane that is named that way,
They´re the band you never heard of but will be utterly impressed when you finally listen to their dramatic rock tunes.
Megosh is the best kept secret from Maryland, USA and they´re ready to unleash their brand new record Apostasy in December that Palace of Rock loves every minute of!
Frontman Josh Grosscup talks about the origin of their bandname, how they warm up before a gig and why they needed a change of atmosphere to work on the new album.
Fans of this band might think they have everything covered but the owls are not what they seem. 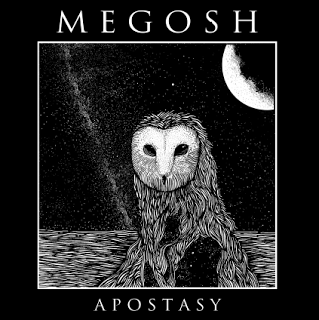 Hello, I read that you went to a Cherokee Indian Reservation in North Carolina for three weeks to write the new album. In what way did it affect your songwriting?

Josh-Plant an Avacado tree in Canada and see what happens. We are city boys and we put ourselves in an environment opposite that which we were used to. We just knew the change of atmosphere would affect us in some way, but we didn't know what to expect. We had no internet or wifi, no phone signal. It was just four walls and music. I will say unlike the avacado plant in Canada, we flourished in that unusual environment. We are extremely happy with what we were able to create up in those mountains.

Is there a theme behind the album´s title Apostasy, would you describe it as a concept album?

Josh-As much as we would love to say this is a concept album, we just can't-- but there is a theme. The album's title relates to our experience up in the mountains of Cherokee. We left behind all we knew. In many ways the album has that feel of change. You hear it in the songs. Sure, there is some flirting sound-wise with our EP, but we definitely experimented and tried new things on this LP. We really couldn't be more happy.

An acoustic version of the song Monsters is featured on your self titled EP from 2013 and it´s also included on the upcoming album Apostasy but in a full-band version. Was it intended from the start to re-record it for the next release?

Josh-The electric version of the song actually is the original. We just didn't have it recorded yet when someone asked Megosh do an acoustic song to be featured on a breast cancer benefit sampler.  We thought, "Monsters might sound good acoustic." Being that most people (unless you've seen us live) only know of the acoustic "Monsters" being the original, we thought it was clever to add the (electric) behind the name since to many it IS the remake.

You have released single songs between the EP and the upcoming full length album like Body Works in 2014, a cover of Zedd´s Clarity in 2015 and the song Winona on the compilation It´s All Acoustic earlier this year.
How come none of these songs are included on Apostasy?

Josh-Because we are always growing. To pick from the past may only limit our future. 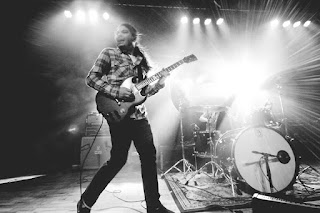 The new album contains 14 brand new songs where the song Carrying Fire features guest vocals from Garret Rapp (The Color Morale), it´s absolutely an amazing track but did you have Garret in mind when you wrote the song or how did you end up working together?

Josh-Hahaha, no we didn't actually. We had Dennis from Alesana in mind (for a different part than Garret sang). But he just never got around to helping us out. So we thought, "who's a friend and would actually enjoy being on our stuff?"  Garret came to mind and we were so pumped to have him!

I think of Megosh´s sound as a blend of artrock, prog and alternative rock but a bit theatrical, not far from bands like Fair To Midland, Monty Are I and Fall Out Boy.
What are your influences?

Josh-Hey, that's actually a fairly decent description of our sound!  (We hate answering the question "how would you describe your sound?"  So... thanks for not asking that. Ok, back to the question you actually asked...)  As many bands would probably tell you, we have quite varied influences from each other. But it really is true. Like Finch is always making us listen to Bobby McFerrin. And when Derv does the night drive he'll put on Kelly Clarkson when he thinks everyone's asleep. But there are a few bands that we all agree are strong influences... The Mars Volta, Coheed, Circa Survive, Queen...  Oh, and Michael Jackson-- he probably gets played more than anything in our tour van!

The band was a 4-piece on the EP but is now reduced to a trio, what happened to the 4th guy, Jon John Michaud on drums?

Josh-It was just time for us to part ways. There isn't any interesting drama to report- we have nothing against Jonjohn and wish him the best.

Your hometown Baltimore might not be known to most people outside the U.S and it´s not easy to name famous artists from Baltimore but I googled and found out it´s the hometown for Kix, SR-71, and other cool bands like Red Line Tragedy, Charm City Devils, Diamond Youth and In Dying Arms.
How is the music climate for rock bands to play live in the city?

Josh-The local bands in baltimore are the BEST, hands down!  So talented. We are Baltimore. We are all under dogs in any facet you choose.

Tell me about the band´s name, Megosh sounds like a quote from a blonde in a college film. How did you come up with the name?

Josh-It's based off a character in a movie filmed in the 80's by a well known director who had a great casting agent who strategically cast the actor to play the part of the character who inspired our name based off of said 80's film. What?

How do you prepare for a show? Do you have like the same ritual you´re going through every night?

Josh-The three of us warm up in the van with a youtube clip of Seth Riggs taking Micheal Jackson through a vocal warm-up. We drink water, sometimes hot tea. Finch smokes something.

Finally, what would be working with if you weren´t in a band?

Josh-I would write novels and become the next Cormack McCarthy.  Finch would produce Hip Hop and be the next Dre.  Derv would move to a cabin in Montana with his dog and grow his beard reeeeally long. 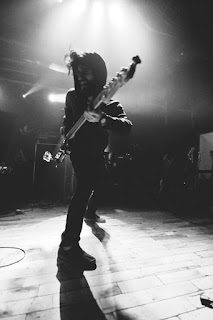