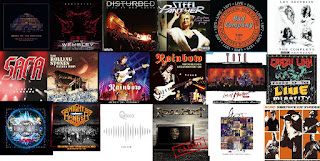 Back in the 70´s and the 80´s, live albums were the highlights of a band´s career but in the 90´s they became more and more like greatest hits albums that sounded like a studio recording with an overdubbed live audience. Boring if you ask me.
Now you might wonder if there are any new good live albums and there are, both new live recordings and the unreleased ones that finally gets an official release.
2016 is not a big year when it comes classic live albums but there are some really nice ones like: