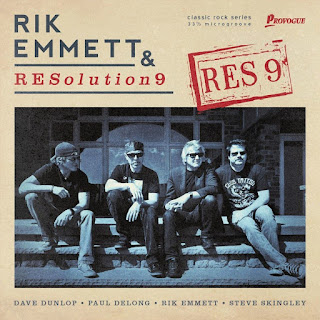 Melodic rock, blues, christmas music, acoustic albums, well Rik Emmett has done the lot. He has released countless of solo albums but what most fans know his work from is the hard rock trio Triumph between 1975 and 1988, plus a short reunion in 2008 at the Sweden Rock Festival.
With the new album RES9, Rik is banging on the big drum because he managed to get his former bandpals in Triumph to play on the track "Grand parade".
Even though the names of Gil Moore - Vocals/Drums and Mike Levine - Bass are credited on "Grand parade", I can´t say it´s sounding like a typical Triumph song.
The song is slightly jazzy and smooth, not that bad though but I expected something else from a band that has released classic hard rock albums such as Rock and roll machine, Just a game and Allied forces.
Rik Emmett´s ultimate goal for RES9 is to connect with as many people as possible, he says there´s a common thread of positivity in the album that ties into the records he was making 30 years ago.
If you look at RES9 as a good melodic blues album, then you will be more than happy to have it in your collection. But if you rather wished for something that would fulfill your every dream of a melodic rock album, then look away and keep going.
Rik is doing some electrifying stunning guitar playing on RES9, he also has a groovy band behind him with Dave Dunlop - Guitar, Paul DeLong - Drums and Steve Skingley - Bass.
The best tracks are the more melodic rocking songs like "Heads up", "Human race" featuring Alex Lifeson on 12-string guitar, "I sing" featuring James LaBrie on lead vocals and the beautiful "My cathedral".
Another cool track is the 70´s rocker "End of the line" that features both Alex Lifeson on the third guitar solo and James LaBrie on lead vocals. The band is hot!
All in all a good album.