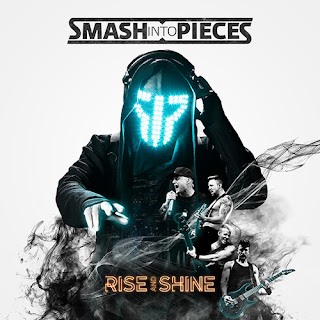 Smash Into Pieces - Rise and shine (2017) Gain / Sony Music
Produced by Per Bergquist / Smash Into Pieces
ROCK / METAL
Tracks : 1.Turn it down 2.Let me be your superhero 3.Merry go round 4.Higher 5.Animal 6.Stay 7.YOLO 8.Save it for the living 9.In love with love 10.Rise and shine
www.facebook.com/SmashIntoPieces
4 out of 5

Touring, touring and more touring, that seems to be the motto for Swedish 5 piece Smash Into Pieces. These guys work hard and in January, they unleash album no.3 "Rise and shine" that features the singles "Let me be your superhero", "Merry go round" and "Higher".
This band is about to become the biggest export of metal from Sweden after Ghost and In Flames. Well, Smash Into Pieces are only waiting for their first big international hit and after hearing their new album "Rise and shine", I must say that it´s on it.
The laid back "In love with love" takes the band out into the masses of mainstream, not to mention the infectious "YOLO" that gets stuck in the head like superglue.
The opening track "Turn it down" defines what´s Smash Into Pieces signature sound, a fat modern hard rock track that sounds like a given partystarter.
I can´t say I was such a big fan of their more pop-oriented singles "Merry go round" and "Higher" at first, but these songs grow and are now good album tracks.
You will find the real highlight at the end of the album with the title track "Rise and shine", Jesus! This one is just as gigantic as Godzilla. Play it loud!
Also, let´s welcome their new drummer that goes by the name of The Apocalypse DJ.
Hats off!
Upplagd av RothNRoll kl. 8:48 AM