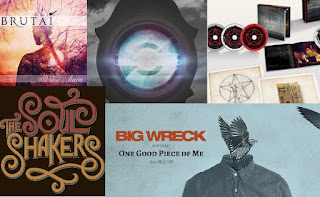 Hello rock fans,
Just when you thought there wouldn´t be any more exciting news in the world of rock music at the end of 2016, cinematic rock band Starset announces sophomore record Vessels to be released in January 2017. The new single Monster promise for great things to come.
And even if Neil Peart has stepped down from any more touring with Rush, the band can still surprise us with excellent releases such as the 40th anniversary re-issue of their epic 2112 album.
This package comes with a bonus disc of covers from Steven Wilson, Billy Talent, Dave Grohl, Alice in Chains, Jacob Moon as well as a disc of previously unreleased live tracks.
Christmas comes early!
You might have noticed that I don´t do much reviews any longer but never say die, just like snow in Sahara, a review drops from a clear blue sky and this time it´s about Brutai´s debut Born.
Read here.
http://www.melodic.net/?page=review&id=111246
I am also working on a new interview with the new rock and roll band The Soul Shakers, it should be online next week. These guys are cool.
Canadian rockers Big Wreck released a brand new song called One Good Piece Of Me that sounds like a wonderful flirt with Asia´s Heat of the moment, who would´ve believed that from Ian Thornley and Co?