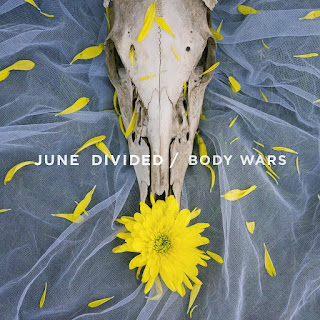 June Divided  Body Wars (2016) Indie rock ear candy
Say hello to Melissa Menago - Lead Vocals/Guitar/Keyboards, Chris Kissel - Guitar, Lenny Sasso - Bass and Keith Gill - Drums. Your new favorite band.
What happens if you mix the 80´s pop of Berlin and T´Pau with modern pop / rock a la PVRIS and Katy Perry? Then you´ll get Philadelphia based June Divided´s 3rd release "Body Wars".
Their new EP is produced by Fred Mascherino (Taking Back Sunday) and I´m happy he has given them a concert hall sounding production, it´s not everyday you get to hear such a big sound with 80´s reverb. Thumbs up.
All 6 tracks are remarkably strong so their songs should be climbing the charts if only press and radio could see beyond Kanye West and Taylor Swift.
(+) Melissa Menago feels like a new Chrissie Hynde.
(-) Why haven´t I heard of this band before? 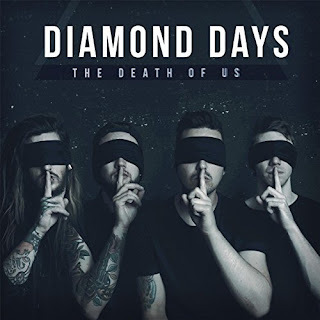 Diamond Days - The Death of Us (2016) Close to emo except the haircuts
With traces of powerpop, energetic rock and pop / punk, Liverpool based Diamond Days now give us their 2nd EP "The death of us" containing 5 tracks where at least 3 are really good.
The EP opens with the short intro "The space between us" but then they turn it up on the following 3 songs "The death of us", the funny title "Not every song with a long name was written by Fall Out Boy" and "Kings and Queens".
The last song "We are young" is a bit mediocre and doesn´t reach the same level as the other songs.
Alex Fearn - Vocals/Guitar, Tom Shepherd - Guitar/Vocals, Tom Jack Jackson - Bass/Vocals and Mark Highdale - Drums/Vocals are often compared to Panic At The Disco, You Me At Six and Fall Out Boy but in my ears, Diamond Days sound more like the bands Cartel, Transit and Futures.
Their debut EP "We´ve come a long way" was released in 2014 if you feel like checking out more songs.
(+) Be sure to keep them on your radar, this band will get better.
(-) At times, they are a bit anonymous. 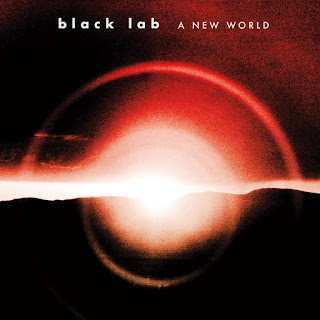 Black Lab - A New World (2016) Still going strong
It´s hard to keep track on every single release Black Lab puts out with compilations, b-sides, instrumental albums, acoustic albums, live albums, unreleased collections, EP´s, remixes but the studio albums you should know about are "Your body above me" (1997), "See the sun" (2005), "Passion leaves a trace" (2007), "Two strangers" (2010), "A raven has my heart" (2014) and their 6th album "A new world".
They´ve been on both Geffen and Epic Records but the last decade, Black Lab has released all the music via their website Blacklabworld.
Paul Durham - Vocals/Guitar and Andy Ellis - Guitar/Programming has taken their band through various styles such as grunge, modern rock and electronica but it has always been clever music to me.
The new album is no exception, I like the moody atmosphere which in some moments bring thoughts to Blue October but not as progressive.
This album needs a few spins to get into but once you do, it will be a close friend.
(+) Here´s a reason why the independent music scene is so much more exciting.
(-) It feels rather sad that such top quality music doesn´t reach a bigger audience.
Upplagd av RothNRoll kl. 9:36 PM