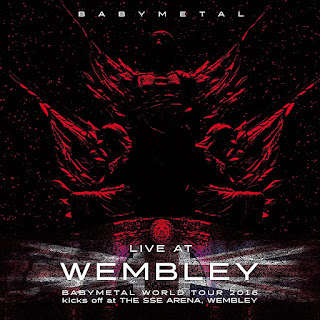 The Metal Resistance world tour kicked off at Wembley, England on April 2nd, 2016 and was recorded for release on CD and DVD.
Just one day earlier, their 2nd studio album Metal Resistance was released featuring the singles "Road of resistance" and "Karate", but that didn´t bother Babymetal that was here to promote the new album rather than playing most of the songs off their first album.
8 tracks are taken from "Metal resistance" and only 5 tracks from the debut, including the world wide hit "Gimme chocolate". By listening to this explosive live album, one can only come to the conclusion that the guys in the band are incredible musicians and it´s more to this than 3 Japanese girls getting maximum credit on the cute-factor.
Babymetal is about spreading love and metal around the world and unite the fans, no matter where they come from or who they are.
The leaders of this world doesn´t have enough metal in their blood, because if they had, there would be everlasting peace among the nations.
If you think Babymetal is just a thing that will go away, think again.
Upplagd av RothNRoll kl. 2:09 PM