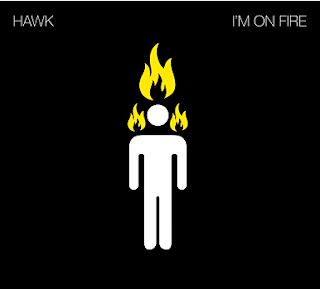 The Chicago based band Hawk is not to be confused with the London based band fronted by Julie Hawk, these Americans sounds like they´re stuck in 1972 and don´t wanna leave either.
Hawk is the brainchild of singer/guitarist David Hawkins who also is the driving force behind alt-country band Be, but Hawk is a completely different thing more towards the rock´n´roll of The Faces, The Rolling Stones and even Hellacopters.
What we´re dealing with here is a re-release and a remastered version of Hawk´s 3rd full length album "I´m on fire", originally released in 2014.
As a songwriter, David is influenced by 60´s rock like The Beatles, The Rolling Stones and The Who but also other bands such as R.E.M and The Velvet Underground.
I think it´s an honest record where the focus lies on basic garage-oriented rock so making catchy choruses isn´t top priority so to speak, however "I´m on fire" is a good album and I do prefer this over The Hives.
Next Hawk album will be out in 2017 and it´s confirmed to feature guests such as Gary Louris (The Jayhawks), Ken Stringfellow (The Posies) and Pete Thomas (Elvis Costello).
Upplagd av RothNRoll kl. 5:18 PM