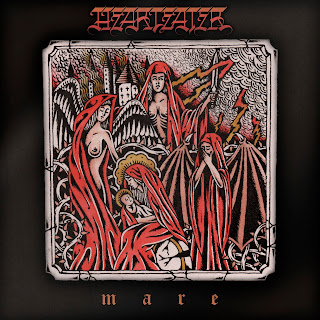 Hearteater is a young band from Copenhagen, Denmark, whose inspiration origins in genres like grunge, nu-metal and metalcore and combines clean vocals, rap and growling where the final result sounds like a blend of classic hard rock, hardcore and extreme metal.
Their first EP dropped in 2015 and in early next year, the 6 track EP "Mare" is unleashed to the world.
The music is both melancholic, dark and at the same time, brutal where the band feels like they are marching on with an army of riffs.
It´s not polished and definitely not mainstream, this is true metal for real metalheads so I won´t be surprised to see them joining Manowar´s "Death to false metal" parade.
Good stuff!
Upplagd av RothNRoll kl. 9:24 AM